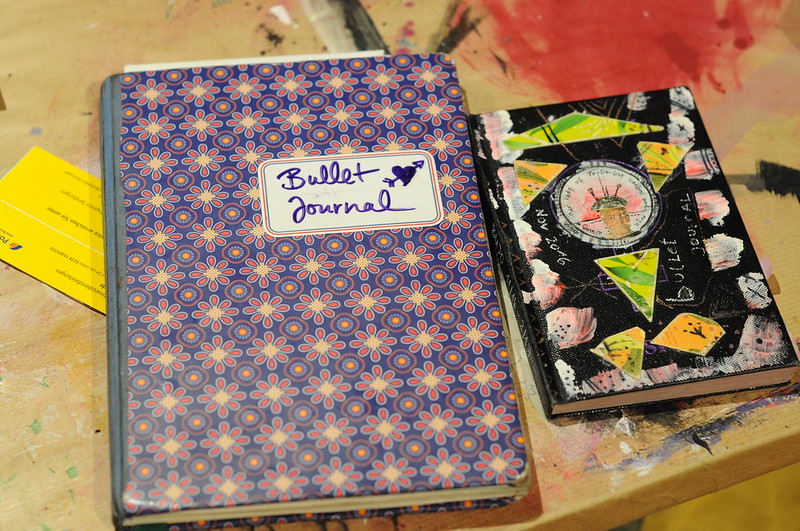 I can’t believe that it’s now been three years since I started bulletjournaling! It is actually the first and only organizing system that worked for me over a long period of time. I don’t know why that is, but I’m very glad it does. Because wow, do I need it.

From when I started my bujo in November 2016, I have had what some people call a “Messy Bujo”. I started it all inspired by a friend and a group of people who had a “messy bulletjournaling” group on a now vanished internet platform. Before that, I had only seen examples of fancy, decorated Bujos on social media, and it was not that interesting to me back then. So I watched the intro video on Bulletjournal.com and was fascinated by the simplicity, and I started right away. 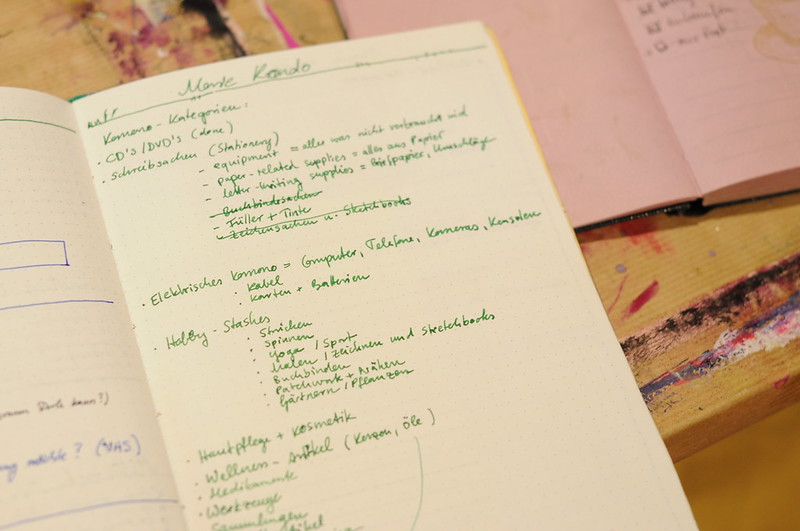 I used the basic elements of bulletjournaling as explained in the video. I made some collections, I started some gratitude pages but I never kept up with them, I tried a food diary and didn’t keep up with that, and then I returned to the basics. Monthly logs, daily logs, a future log, an index, done.

I’m still doing that. trying out stuff and mostly sticking to the basics. Once I tried to do weekly pages, but they became too redundant, either they were a repetition of the monthly log or they were condensed daily logs but without enough space. At the moment, I’m trying out a so called “rolling weekly” where you do not migrate a task from one day to the next, but you write a to-do-List for the whole week. I will have to see if that works for me, because writing daily logs and migrating tasks to the next day is not a bad thing for me: after writing a task for the 6th time, I usually finally do it. 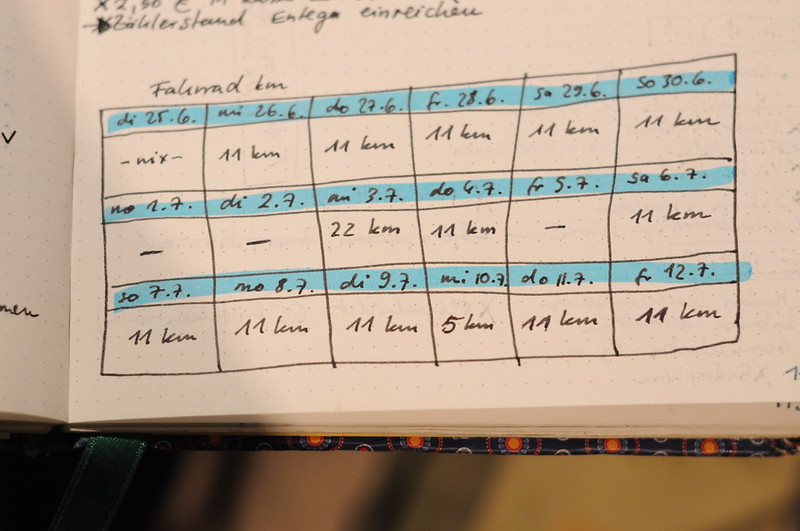 I added a tracker or two, I wrote down notes when I read a book, I used the bujo for grocery lists. 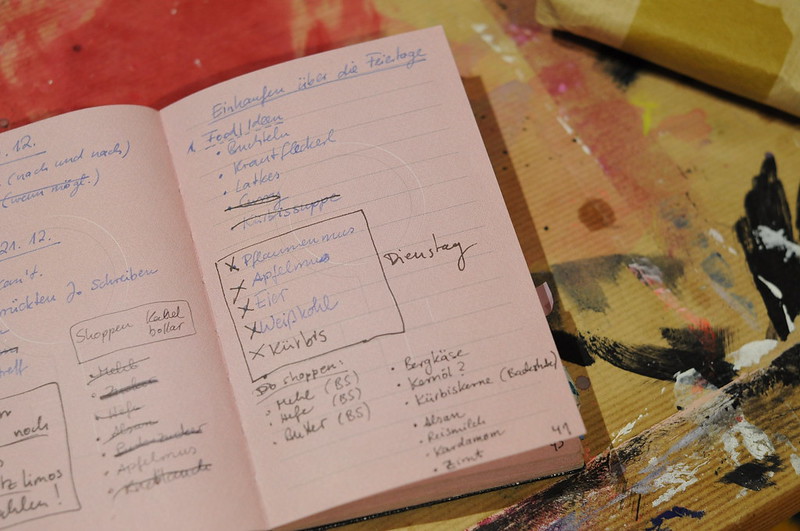 Why does this work for me while other stuff did not work?

Perhaps because it is very practical. I had notes lying around in my room and it was hard not to forget which thing was written down where, and after stuff was done, they got thrown away. Having one place for all those notes? Great! Thanks to the bujo’s index, everything can be found later, so I don’t have to section the book off or write stuff in any particular order. I think that is one big point why bulletjournaling works for me and why I could keep going with it, in contrast to all the other methods of self organization(tm) that I had tried.

It’s also very fast! Before, I had tried digital reminders and to-do-lists like “remember the milk”. It wasn’t sustainable, because really, it takes so much time to unlock the phone, start the app, type in the stuff, and look at the stuff. So I didn’t write it all down, but what mattered more, I never looked at those lists. Doing it digital is just very slow. Opening an analog book takes only a second. And since I’m not a person who is always on their phone anyway, I tend to find it tedious to unlock my phone first.

It’s also adaptable to what you need: In the first year, I never used the monthly log as a calendar, because *that* is something that worked for me digitally. And in years back, my calendars/planners never got used beyond the first 2 or 3 weeks of a year, because the calendar format is not really what I need most in my planner/notebook. What I need most are actually the task lists. (I added the monthly logs/calendars back in later, and stopped using the digital calendar, but if I didn’t want them, I didn’t have to use them.)

The system accounts for imperfection: most times, I don’t get my task list for the day done on that day. Sometimes I don’t get a single thing done. Before, I had written To-Do-Lists and it became frustrating when they accumulated more and more items and they really never got done. The method of migrating a task to the next day or next week is much better for me: A list gets completed, because all the items are either done or migrated.

And lastly, the big variety of fancy stuff and ideas and inspiration that you can put into your bujo. While I mostly do keep it basic, I like to watch some fancy bujo videos, and I do like to try out fancy layouts sometimes. And that also keeps me motivated to stay with the system. And when I don’t have time for that? I can always fall back on the bare basics and just write my simple logs with a pen in a simple book.

How effective is it for me?

I don’t think I’m a very effective person. For me, it’s hard to stay organized, and I am very forgetful and often need reminders of basically everything. Before the bujo era, I could remember the most important things and my forgetfulness weeded out pretty much everything else, and if I forgot tasks, other people would have to remind me of them..

Sometimes it feels as if this stayed the same, I am still forgetful and some stuff just isn’t on my mind. But thanks to the bulletjournal method, the amount of stuff that I am able to organize has greatly increased. Basically, I have become much better, while the challenge has become bigger as well. So… same same, but different. yes, all is pretty good! 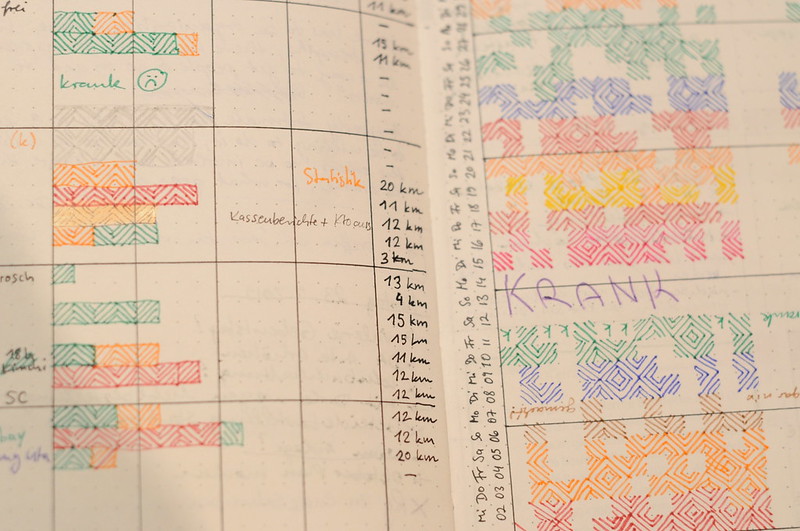 2 thoughts on “3 Years of Bulletjournaling”